Norman is a young man whose dream is to become the greatest water skier in the world. He has a great dream but he has been trying for years and never seems to succeed. He is a great metaphor for life “DREAM BIG, NEVER GIVE UP.” What Norman never sees are his failures. Every time something does not go as planned, Norman brushes off the set back and looks forward to his next big idea.

Norman came from a small town in Northern Minnesota. He watched many kids water ski and have fun at lakes near his home. His parents were not water skiers, they did not have a boat, and they did not like the water. Norman on the other hand wanted to be a great water skier and made his own boat to follow his dream. He tried many times to play with the other kids but they only laughed at him and told him to go away.

Determined, Norman set out to create a boat that did not need a driver and equipment that would make him a great skier. After several successes, Norman thought he was ready for the big leagues. He wanted to be part of a water ski show. He put together a video highlighting his best water ski stunts and sent it off to “The Greatest Show On H2O.” When Catfish Bay received his video they were amazed at the talent Norman had. What Catfish Bay did not realize was Norman had taken a few liberties with his digital editing program and enhanced his skiing skills a little a lot.

Norman was hired based on his video performance. He was told to report for duty with all his best water ski gear. When Norman showed up for his first day, the water ski team could see they had a problem. Norman was not the skier he said he was. The team tried to quickly teach Norman basic water ski tricks with no luck. The team had to make a decision. Should they tell Norman to leave and crush his spirit or should they try to fit him into the show so he could follow his dreams. Skiing at Catfish Bay is all about following your dreams, so the team worked together to make Norman feel at home and part of the team.

Many team members had a big heart for Norman and knew from personal experiences what Norman was going thru. They took Norman under their wing and worked with him to be a part of the show. The team gave Norman small parts in the show so he had a purpose. They made him feel like he was part of something great. The team thought Norman would only last a summer and then would go back home. The team was wrong.

During a heated conversation with Norman at the end of his first ski season, Norman was told “Come back to Catfish Bay when you find talent!”. Norman took that comment a little of context and became Catfish Bay’s self-appointed talent scout. Little did the team know that one critical conversation would change their show and team for many years to come. Norman started traveling the world in search of new talent for The Greatest Show On H2O at Catfish Bay.

The first group of talented skiers he found were backwoods water skiing hillbillies. He showed up with his crew of hillbillies and proceeded to incorporate them into the show. As can be imagined, the hillbillies had many wild ideas and never before seen water ski acts like skiing behind a snowmobile.

Normans next group were clowns that came from a circus Norman had joined. Norman wanted to learn some circus tricks to incorporate into the water ski show. He became friends with the clowns and included them in his wild stunt ideas. Things were actually going well for Norman at the circus. Crowds were cheering, he was having fun and the clowns were becoming his friends. It was all going well until Norman pushed things a little too far and filled the circus tent with water for a water ski stunt. He made a powerful clown car to pull the clowns on skis. Their first circus water skiing debut did not go well. Norman was a little late for a turn, hot on the throttle, and did not see the popcorn cart until it was too late. Norman took a hard right at ring #3, hooked a tent pole and pulled the entire tent over on the crowd. No one was hurt, but as you can imagine Norman was fired along with all the clowns who had helped with Normans wild idea. Norman felt bad for the clowns he got fired and invited them back to Catfish Bay to be a part of his show.

One year Norman tricked his whole family, Momma Norman, Papa Norman, Grandpa Norman, Normee Jr, Normee Jr Jr, his sister Norma Jean and more Norman Family members into coming to Catfish Bay. He told them they were going on a summer vacation to Hawaii but stopped a little short at Catfish Bay.

Norman is in his element and proud of his accomplishments as the talent scout for Catfish Bay. He dreams big, never gives up and has a great positive attitude. Each of us has a little bit of Norman in us. We need to let him loose once in awhile.

DREAM BIG!!!!, take risks, overlook your setbacks and NEVER, NEVER GIVE UP!!!.

Norman   "Dream Big Never Give Up" 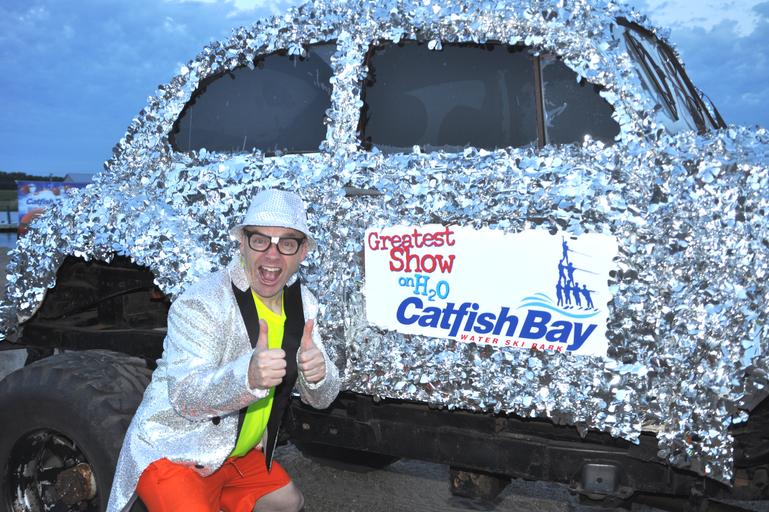